The background and history of events which lead to the establishment of Hoërskool Carletonville can be traced back to 1896 – the year in which the first private school was established in the Carletonville area.

With the outbreak of the Anglo-boer war the school was temporarily shut down and only resumed its educational task after the war was ended.  The school was first run in a tent and later from a building constructed of corrugated iron.  This school closed down in 1910.

A new school was only opened in 1924.  This school struggled to survive and was therefore closed down in 1927.  In 1929 Dutch settlers settled on Wonderfontein farm.  A school was started which served the community from April 1929 to June 1964.

The school started out with 21 learners of which 9 were Dutch speaking.  On October 10, 1929 Mr. K.J. Kerling assumed the duties as principal of this school.

1945 sees the beginning of the establishment of Carletonville as town.  On July 30, 1946 the school is moved to temporary buildings in Carletonville.  The numbers have grown to 60 learners and 2 staff members.

Ever since that day the school continued growing…..

January 1949 – the learner numbers have grown to 213 and the teaching staff included 7 people.  A decision was taken to grant Carletonville a permanent school building.  On 15 September the official school building was inaugurated by the administrator, Dr. W. Nicol.

Meanwhile a whole lot of development took place in the area which created the need for high school facilities.  In January 1951 this school upgraded to a group 2 school with the addition of standard 7.  The year after, they expanded to standard 8.  The numbers of the higher grades increased at such a tremendous speed, that the education department decided to start an independent high school at the start of 1953. 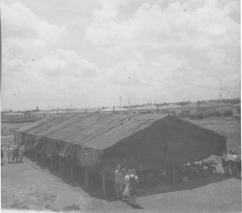 The new high school opened its doors on January 7, 1953 with Mr. K.J. Kerling as the acting principal.  The school had 465 learners – both English and Afrikaans speaking – and 24 teachers.  As a result of a shortage of classrooms, West-Driefontein mine erected a structure which was divided into classrooms and covered with railway canvas drops.  While the learners were accommodated in these tents, the education department busied themselves with the building of temporary classrooms.  On March 7, 1953 the learners and teachers moved into the temporary classrooms and on July 4 of the same year the Administrator Mr. W. Nicol officially inaugurated the building.

The first permanently appointed principal, Mr. J. Mahne took over from Mr. Kerling in January 1954.  At that time the school consisted of 520 learners and 26 teachers.

In 1957 an English medium group 2 school broke away on its own – but despite this, the school still started 1957 with a total of 731 learners.

After many years’ agitation, the authorities granted the permission to build a permanent school building.  On 10 October 1964 Ds. I. Roux turned the first soil as the chairperson of the governing body.

The cornerstone was layed on 10 September 1965 by the late Director of Education, Mr. A.J. Koen.  At long last the building was complete and it was occupied on 24 January 1967.  On 25 August of the same year, the school was officially inaugurated by the late Administrator Sybrand van Niekerk.  The new school building cost R588 000.

At the end of 1972 the Carletonville High Trade School closed its doors and the Afrikaans speaking students were enrolled at Hoërskool Carletonville.  The school was bursting at the seams, therefore temporary buildings had to be erected.

In August 1973 Mr. Mahne passed away as a result of his struggle against cancer.  This happened only five weeks before he was about to retire.

In January 1974 Mr. F.J. Kotze was welcomed as the new principal.  He was appointed as Inspector of Afrikaans Home Language in 1975 and therefore left the school.  Dr. F.J. Grobler acted as principal until his retirement on 30 September 1975.

Mr. G.A. Kruger took over as principal.  But in August 1981 Mr. Kruger accepted the appointment as principal at Hoërskool Brits.

Mr. S. Strydom, who had been Deputy Principal at Hoërskool Riebeeckrand, was appointed as principal in January 1982.  At this stage the school had 1415 learners who were taught by 66 teachers.  In 1982 the teaching staff grew to 74 with 1432 learners.  The number of learners kept growing and on the tenth school day of 1985 the number stood at 1498 and 77 teaching posts were allocated to the school.  By this time the school was completely bursting at the seams – and yet this is not the end.  On the tenth school day of 1987 the school boasted with a total of 1591 learners and 81 teachers.

When Mr. Strydom went on long leave on 29 January 1988, Mr. I.C. Pienaar was appointed as acting principal.  At the end of 1989 the school bade Mr. Strydom farewell after eight prosperous years.

Changes in the Education Department and the whole school system brought about the transformation of Callies to a Model C school.  This meant that the school buildings and all property became the property of the school and the governing body.  Rationalizing and redeployment and redundancy of posts forced the school to lose four teaching staff members in 1995, another one in April 1996.  This brought about bigger classes, the transformation to a double medium school – therefore English speaking students were enrolled yet again.

The Gauteng Educational Department took charge of the school buildings, grounds and property yet again.  This brought about that Callies changed back to a state school again.

Mr. Meyer is appointed acting principal on the 1st of August 2012 after Mr. Pienaar’s retirement.  On the 1st of October 2012 mr. Meyer is officially appointed as the new principal of Highschool Carletonville.  At ths moment the school can proudly boast a learner compliment of 840 Students and 42 Educators.

We are also in the middle of the implementation of the new CAPS education system.  And as of 2014 all Gr. 10 – 12 register classes were integrated to accommodate Afrikaans and english speaking learners under one roof during register period.