Tears build up in our eyes when we have to think that uncle Louis Horn is leaving the Callies family.  Uncle Louis rolled into Callies in December 1999 with his absolute expertise.  His facial expression, gentle heart, knowledge and ingenuity suddenly made everything on the school grounds grow without a crumb of fertilizer.

Uncle Louis hands could handle any job, one always says that a woman can “multi-task”, but in this case uncle Louis can give a few women a go.  He can literally do anything, welding, drilling, hammering, washing, painting, driving, carving and anything else you can think of.  For the teachers uncle Louis was an absolute angel sent and without him some would not have been able to make it through the day.  If a class key was lost or forgotten or you had car problems then uncle Louis was always the go-to person.  If you had to go to the bank, uncle Louis would go with, if one of the Potch cars broke down, uncle Louis would happily tow them into town.  Even the learners found their way to uncle Louis.  When a shoe or jersey was lost, or a ball was stuck on a roof or in a tree uncle Louis would gladly help.

Uncle Louis’ handiwork left a distinctive imprint and you only need to cast half an eye to the school ground and buildings to see it.

Uncle Louis lay down his reigns at the end of October after 20 years and 10 months at High school Carletonville, but his light will forever shine bright.  He is leaving behind a legacy and big shoes to fill, it’s going to be a struggle to find someone that matches uncle Louis caliber.

Uncle Louis is moving to Bela Bela where he is fortunate enough to be staying on a Cheetah conservation farm.  Have a great rest uncle Louis and just know that in the hearts of everyone at Callies your memory shall live on forever. 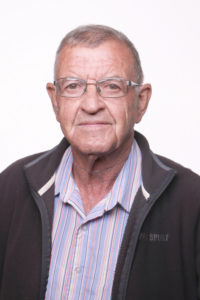